My name is Janée. (It rhymes with “hey”.) And I love beer. It’s a way of life. There’s almost nothing a great craft beer can’t do for me. To me, it’s limitless. It’s an adventure. I 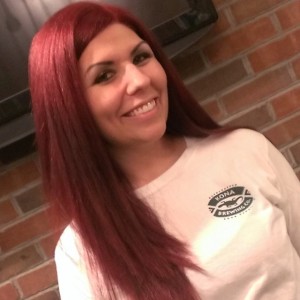 never get bored with it, and I’m always learning new things about it and exploring tastes and flavor combinations I never would have imagined.

If you’re reading this and expecting to hear about my adventures with Miller Lite, that is not my story. But I encourage you to continue anyway. (There is a really good one about Bud Light, but we’ll save that for another day!) People deserve to know what’s out there.  It’s like dating… You shouldn’t just settle for the first thing you try because it’s readily available and convenient. Relationships aren’t about just having something to do; they’re about having something worthwhile and exciting. Beer is no different.

You’ve probably realized by now… I’m a beer geek. I get excited when I meet someone who has an appreciation of a glycol-cooled draft system, or a rare, limited run barrel-aged beer from a fantastic craft brewery. I appreciate disdain for frosted beer glasses at a craft beer bar.  And I cringe when a bartender responds to my beer order with, “That’s a dark beer. Are you okay with that?”

“Oh shit, it’s a dark beer? Well then, never mind. Just give me a light-colored beer please, because I prefer that taste.” (I’m sure at some point I’ll have an entire post dedicated to that topic, alone.)

Along with “beer geek”, I’ve also been affectionately and not so affectionately referred to as a “beer snob”… I like to think of that occasional title as one that is an expression of how passionate I am about good beer… But I know I’ve caused a bartender or two to roll an eye as they walked away from me. And I’m generally good with that.

Beer has become a big part of who I am. I started to write that it’s in my blood, and I literally laughed out loud as I sit here with a beer in my hand and the alcohol running through my blood stream. On my first date with my husband, Ben, we instantly bonded over our love of good beer. Ben and I plan entire vacations around beer.  And when we go on a trip somewhere for non-beer reasons, we make sure to make it about beer by researching good beer stores or local brewpubs and breweries for us to check out along the way. My husband brews amazing beers. (And my one solo attempt at homebrewing was less than amazing, but I guess I shouldn’t have expected  a win right off the bat. Especially with a jalapeno saison!) We have an excellent beer cellar in our basement, boasting well over a year’s inventory of beer for two. Oh, and guess where we got married? That’s right. A brewery.

But where did it all begin?

It starts the same way for most people… Friends in high school. A party in college. An older brother or sister. And for some (I’ve been told…), it starts with the flash of an ID on your 21st birthday.

My story starts like I imagine some others might. As a kid at a family party, adults are sipping this forbidden beverage out of red cups. I’d like to think that my first taste was fully intentional, but truth is, I picked up that cup just looking for an innocent childhood sip of Mt. Dew. I was not happy when I realized what this mysterious beverage actually tasted like, and quickly sought out my misplaced soda to wash that taste out of my mouth.

“Why would anyone want to drink this?” I remember thinking.

I wanted to drink that.

Those were the days where choosing Miller Lite over Coors Light seemed like a triumph. And where my introduction to Yuengling Lager (a staple for Pennsylvanians) seemed mind-blowing.

Where drinking beer was not about tasting beer.

My good ol’ cousin, Abe, once said, “Whatever you are, be a good one.” (Yes, I mean Abe Lincoln. And I’m not shitting you. That awesomeness literally runs in my blood. And I mean that in the most non-narcissistic way possible. Okay… maybe there’s a touch of narcissism in there! But, shit. Can you even think of someone more awesome to be related to?)

This quote has always stood out in my mind and has always rung true to me. Whatever you choose to do in this world, be good at it. Really, what this means to me is to never settle. You always have a choice. Choose something exciting. Choose the good stuff.

I’m an adventurer by nature. I don’t sit still. I’m not complacent. If I don’t like something the way it is, I change it. And I’m always up for a challenge. For example, one night, at a bar (shocker) with my cousin, we were talking about fitness and our short-distance running (ok… let’s be honest… “jogging”) attempts. That night, beer convinced us to register for our first half-marathon (13.1 miles) together. Most people would have signed up for a 5K or a 10K or 15K before attempting a half-marathon. But where’s the challenge and adventure in that?

So the beer question remains. “Is this it?”

Of course it’s not! Miller. Coors. Budweiser. That shit’s not an adventure. It’s a sad, sad reality that millions of Americans face every day. It’s like only trying a burger from McDonald’s, and thinking that it’s the end all, be all of burgers. I have two words. Fuck. That. When is the cheapest (and most available) thing ever the best? It’s not.

Real beer is an adventure, as it should be. And as most everything should be, for that matter. Where’s the excitement in those corn and rice-based “beers”? Reality is that lots of people actually think that’s all that beer is.

Fellow beer geeks, as lovers of great beer, it is our job to share good beer with others. Share beers with other beer lovers. Share them with someone who never tried a “craft beer” before. Share them with people who don’t even drink beer! (My grandmother was never interested in beer, but enjoyed coffee. I’ll always remember sharing some Atwater Vanilla Java Porter with her and seeing the look on her face when she was pleasantly surprised that she liked it.)

When I decided to write this blog, it was after having shared some beers with strangers at House of 1,000 Beers in New Kensington, PA. Ben and I sat at the bar and each ordered a beer. (I had The Bruery’s Five Golden Rings on tap!) Two guys were sitting at the corner of the bar, facing us, and I overheard them talking about the additional tasting glasses they got for their friend who they felt wasn’t going to show up. I told them I overheard and would gladly help them out if they needed an extra beer drinker. They happily handed over the extra tasting glasses and got some for my husband, too, so we could share some of the bottles they had.  So the four of us sat there laughing and sharing for probably another hour just talking about the amazing beers we had tried and the breweries we had visited.

We left House of 1,000 Beers like two truly made for each other beer geeks. (Is “We BEERlong Together” the story of me and beer, or me and my husband…? You may never know…) We kept talking about how great it was to be able to share our passion with other people. We had discussed our upcoming beer adventures for the year the day before, and decided to embark on an ambitious goal of visiting 52 breweries in 52 weeks – one a week for the entire year, basically. We were headed to brewery #1, All Saints Brewing, in Greensburg, next. As we talked in the car on the way, we decided that the time for me to start on a beer blog had finally come.

It’s our hope to open our own brewery or brewpub one day. And we’re both also studying to become Certified Cicerones!

I work in Marketing for a multi-billion dollar( family-run!) company creating beverages, and I love every minute of it. Ben works for the same company, running half of one of our distribution centers and production facilities. I studied Journalism briefly in college and got my degree in Communications from Penn State. I used to love to write and I’m excited to get back into it with something I’m passionate about.

In the time it took me to construct my first post, I drank the following:

I promise I don’t have a problem. It just took me an entire ridiculous week to write my first post!

9 thoughts on “My Story”