It’s fall. The leaves are turning. Boots and scarves are coming out of hibernation. The weather is cooling. And alllllllll things pumpkin have come out of the woodwork.

Don’t get me wrong. I’ll still be a basic bitch in my Uggs and leggings and North Face fleece. But I’ll be the one who’s drinking something more intriguing that garners a little more depth and a lot more mystery. Everyone else can be content sipping on their Starbucks Pumpkin Spice lattes, not knowing a world out there full of excitement and intrigue. Never knowing a bourbon-barrel aged, full-bodied, pumpkin stout. Never knowing the comfort of the warming sensation of a high ABV smoked pumpkin porter that echoes the aroma of a warm fireplace and vanilla candles on a cool autumn night.

Are you thirsty yet?

Basic bitches, join the dark side. Gentlemen, start your engines. Beer geeks, newbies, and those intrigued, grab a beer glass.

My list of top pumpkin beers is not for the faint of heart. Pumpkin spice lattes are like a little, delicate flower . Is Autumn the time of year for delicate things and flowers?

My top pumpkin beers aren’t the low ABV lagers or ales, or shandys, or wheat beers of summer.

So ditch that latte and warm up with one of my all-time favorite pumpkin beers.

Here are my top ten:

#10 – Southern Tier Pumking (*produced 2012 and earlier) – Pumking seems to have changed a good bit from its original recipe. Differences in batches definitely happen with beer. Unfortunately, today’s Pumking doesn’t make the list, as I think it lacks some of the balance and richness that the older brew had. But if you happen to have an older one hanging it your beer cellar, savor it. If you don’t, you can always drink a new Pumking and reminisce! Today’s brew may actually be a little more approachable for the beginner or pumpkin beer skeptic, and it’s still a favorite to many. But be careful; this brew checks in at an 8.6 % ABV.

(There’s also a killer Southern Tier beer blend using their Pumking and their Crème Brulee beers. If it were bottled as one, it would make the top 5 of this list! Find a few friends to share the 44 ounces of amazingness with, or hope to be lucky enough to find both on tap. It’s called a “King Brulee”.) 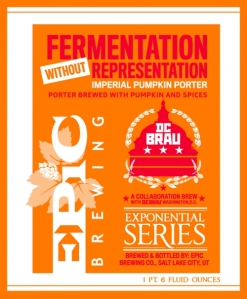 #9 – Epic Fermentation Without Representation (Batch #8) – This is an Imperial Pumpkin Porter that’s pretty approachable. It’s pumpkin puree forward and very lightly spiced. The yam seems to push the pumpkin forward through the dry chocolate. This is another great gateway pumpkin beer. The batch I had rang in at 7.7 % ABV, but today’s batches are around 1 % higher.

#8 – Uinta Oak Jacked Imperial Pumpkin Ale – Now we’re getting into some barrel-aged, malty goodness! This beer was aged on oak barrels, which impart flavors of vanilla and bourbon. It’s the highest ABV beer on this list at 10.31%, which is supposedly a nod to Halloween. It’s smooth and woody, with some caramel and crème brulee notes. This is the first great warming beer on my list, and it’s perfect for any whiskey lover. Let this beer start to warm slightly before drinking. It’s best tasted at around 57-61 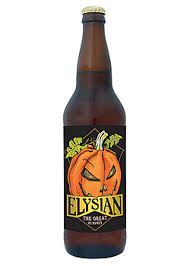 #7 – Elysian The Great Pumpkin Ale – This one is perfectly spiced with cinnamon, cloves, nutmeg and allspice. It has a pie crust-like, bready taste. Pumpkin is very present all throughout the beer. At 8% ABV, it’s still very approachable. 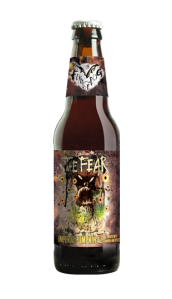 #6 – Flying Dog The Fear – The malts make this beer a deep, dark, and complex brew. Chocolate, vanilla, and burnt toffee shine, while the pumpkin, which can easily be lost in a beer this big, comes through with perfection. I desperately want another bottle of this to use as the substitute for root beer in a root beer float. It checks in at 9% ABV.

the lowest ABV on my list, but still close to twice the ABV of your “standard light beer”. Dogfish Head produces some stellar beers. This is no exception. It’s like pumpkin pie in a glass. There’s plenty of brown sugar, and substantial pumpkin flavor, along with the perfect balance of spices. And it’s a Brown Ale, so it pairs beautifully with fall foods like beef stews, turkey, sweet potatoes and many cheesy comfort foods.

#4 – Southern Tier Warlock – Warlock is one of the biggest, darkest, and richest pumpkin beers I’ve had. This is the beer that kicks the asses of all pumpkin spice lattes. It boasts big roasted malts and a pumpkin pie taste, a bit of cinnamon, and low carbonation. It even has a bit of gingerbread in the nose, almost taunting those delicately flavored lattes. I would nom on a piece of carrot cake while I drink on this one! It has an 8.6% ABV. 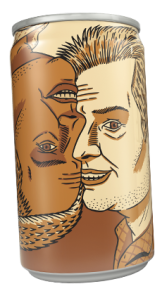 brilliantly done. There’s cinnamon, clove, a medium smokiness on the nose. Faint, but perfectly present, pumpkin in the nose as well. Coffee and possibly star anise. This beer speaks the language of fall best . I suggest this for a cold fall night spent indoors thawing off under big blankets by a fireplace. This will warm you up almost better than a heated blanket and a big bowl of soup will. It checks in at 8.2% ABV.

#2 – Hoppin’ Frog Barrel Aged Frog’s Hollow Double Pumpkin – I wanted to stand up and applaud when I first tried this at the brewery.

(Honestly, I wanted to stand up and applaud everything I had there.)It’s an 8.4% ABV. Aged in Kentucky bourbon barrels, this beer kills it. Bourbon and pumpkin kick you in the nose, then vanilla and oak dance around in brilliance on your tongue. The blending of flavors is crazy good. Sadly, this barrel aged beer is out of production. Happily for me though… my cellar has at least one of these beauties aging for my enjoyment for next fall! And the non barrel aged version is still an ass kicker on its own!

#1 – Old Lady – My husband’s award-winning homebrew. (And, NO, it’s not named after me, his “old lady”. It’s named after the little old lady we ran into at the millionth store we visited in 2012 to try to find canned pumpkin. There was a shortage that year. Ben does the best impression of this little old lady explaining it to us.)

I’m a pumpkin snob. I’m a harsh critic of ALL things pumpkin. And this one takes the cake. It’s my favorite pumpkin beer. Ever. Hands down. From the first test batch, this beer of this was stellar. Every time we brew it, the day it’s brewed, our friends and family and co-workers already claim the majority of our 10 gallon batch. It’s perfection, bottled.

Coming in at around 9% ABV, this beer will sneak up on you. It’s not alcohol-forward. It’s brewed with canned, organic pumpkin, nutmeg, cinnamon, allspice, ginger, and brown sugar. It’s a medium-bodied, deceptively drinkable beer. Every time it’s been entered into a competition, it has taken first place in its category (vegetable/fruit beer) for the entire competition, or at least for the first round. This includes taking first place in the first round of the National Homebrew Competition, which is the world’s largest homebrew competition.

It’s a deceitful little bitch. Drink two bottles, and you’ll think you can drink 4 more. This is the epitome of pumpkin beer for me. It’s a wolf in sheep’s clothing. The brown sugar and spiced perfection are so alluring that it’s hard to stop drinking. (Okay… “Guzzling”…)

(Our latest batch of this beer fell short due to fermenting at a slightly higher temp, and because a good amount of the spices were accidentally pulled out with one of the hop bags. Lesson learned, and adjustments made for next time!)

This is our most brewed beer, and I’m already anxiously awaiting the next batch! Don’t be sad that you may not have access to my # 1 pumpkin beer right now. One day, it won’t be just a fantastic homebrew!

There were a few beers I couldn’t find in time, but am really looking forward to trying soon! Elysian’s Punkoccino is one I feel will be added to the list. The Bruery’s Ignis Fatuus is sitting in my Reserve Society collection at the brewery, to be picked up on our trip to California in March! And I’m curious about Avery’s PumpKYn.

There are plenty of other pumpkin beers out there. I’m sure the ones I’ve tried only touch the tip of the pumpkin beer iceberg. Some I had were very good. Others weren’t. There are a few really solid ones I had, too. Twisted Pine’s Modern Pine-eer India Pumpkin Ale was a fantastically well-done pumpkin IPA that takes the cake for the lighter pumpkin beers, hands down. Some, I expected greatness from, like Avery’s Rumpkin, but just got an overly boozy glass of disappointment. Others missed the pumpkin mark entirely, one of them being Wicked Weed’s Jack O’ Hammered pumpkin beer brewed with chilies.

Below is a list of others I’ve tried that didn’t make the cut in the top ten:

One thought on “The Biggest, Baddest, Top 10 Pumpkin Beer List”