Another beercation has come and gone. Cue the sad emoji with tears welling in his eyes. Thankfully, I took lots of selfies (er, pictures!) to remember our trip by! And you know I sent myself home some tasty souvenirs.

Last week, Ben and I set off on an 8 day long adventure (really just 7 days, as our last day was just a travel day), leaving our home in North Carolina to fly to Portland, Oregon. From there, we drove west and into Northern California, and then down into So Cal. Here’s my beakdown! And because you all know how lengthy my stories can get, I’ll break it down into bite-sized pieces with a separate blog post for each vacation day. (You’re welcome.)

(Note that my Untappd ratings will sometimes appear in parentheses beside noteworthy beers.)

Ben and I had never been here before, and the beer and food scene is supposed to be incredible. So we figured we’d tack this on to our now annual California beercation. It was rainy and cold when we landed, but armed with pages of printed beer blogger notes, and with lists from some helpful foodie friends (Thanks, Alex!), we were ready to take on whatever Portland had in store for us!

Unfortunately for Ben… the food poisioning that had graced me with its presence last weekend had decided to finally pay him a visit. We were able to visit one spot together before Ben retreated to our hotel room, never to discover more of Portland. 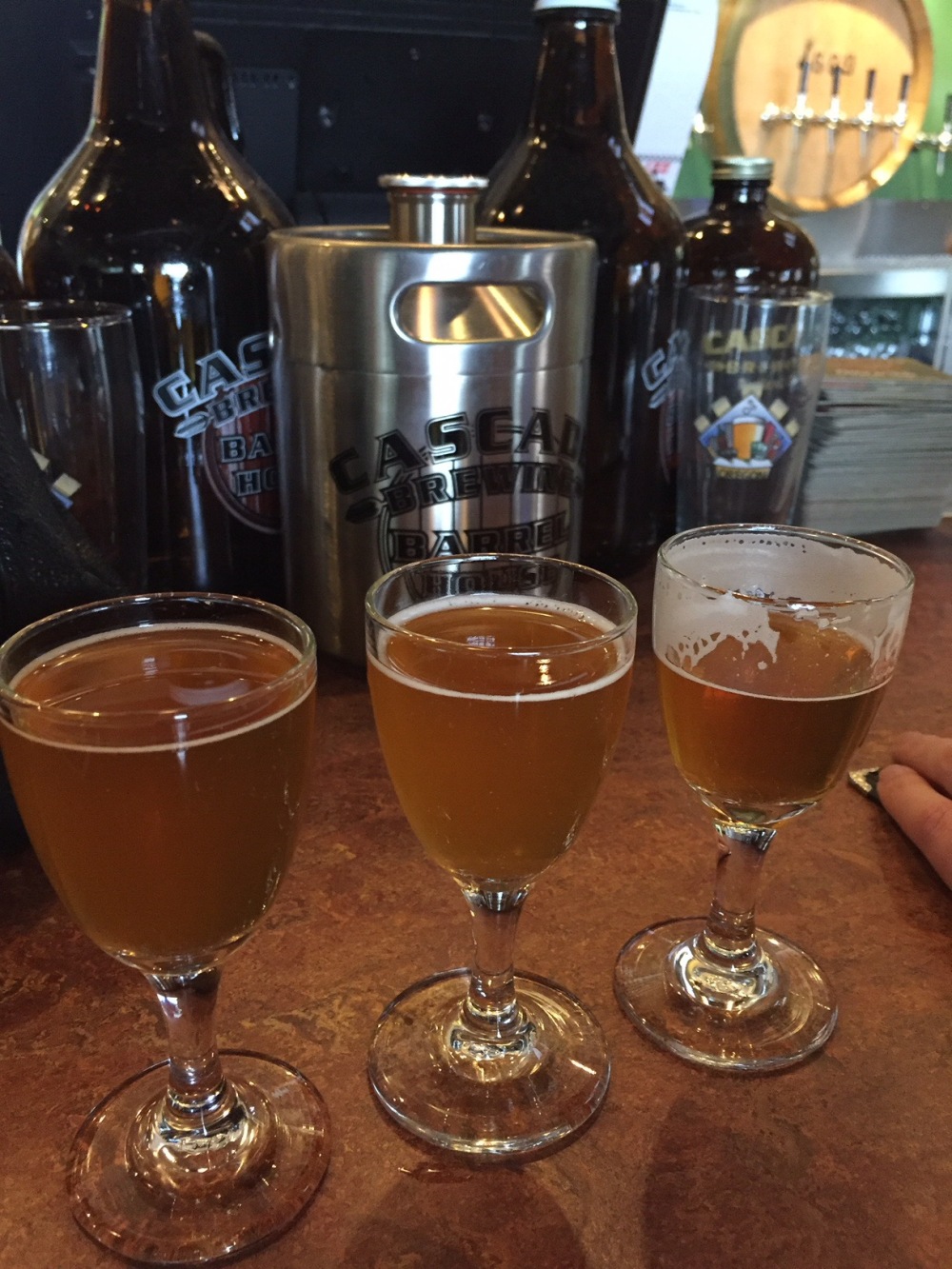 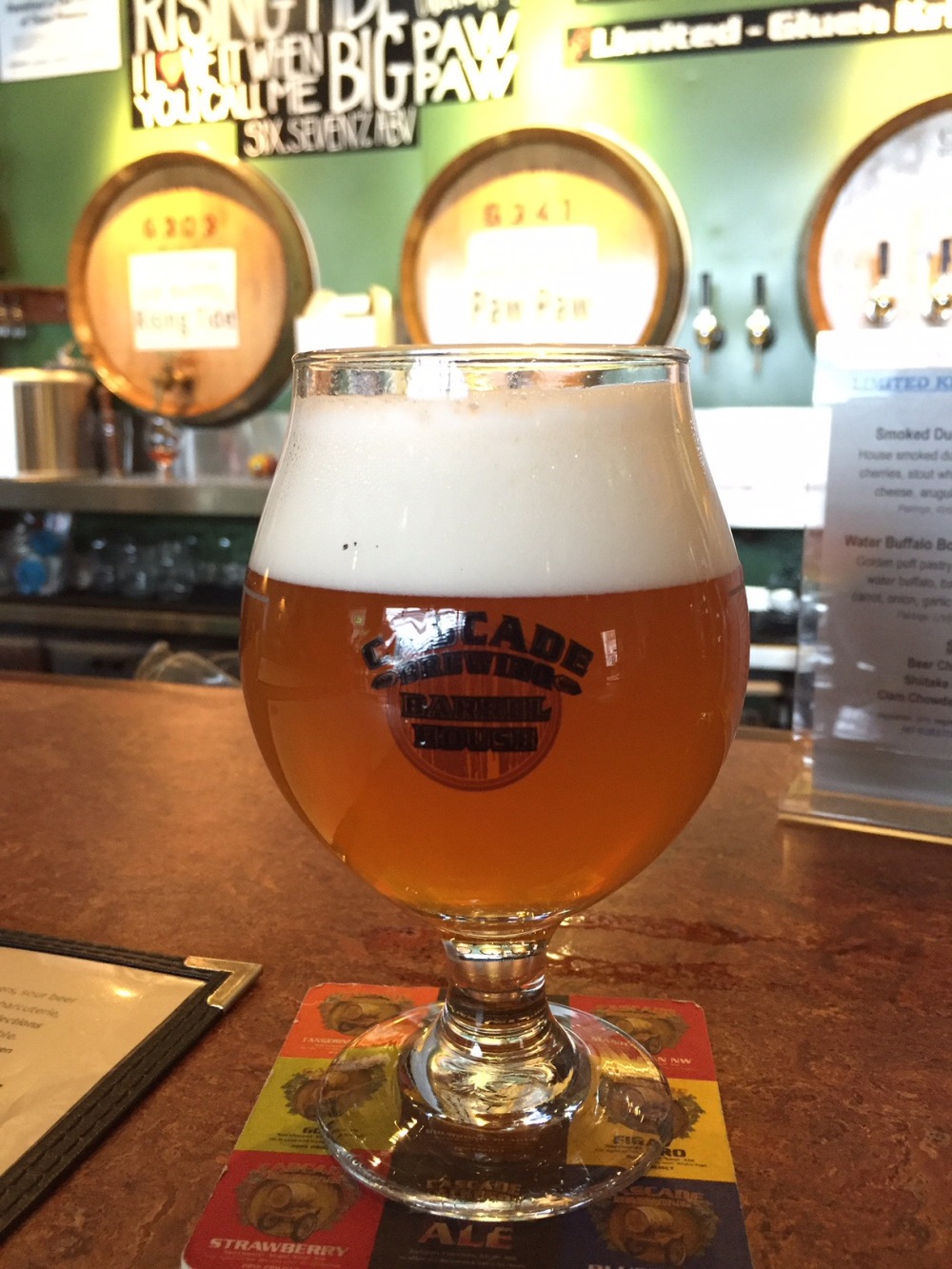 A great spot to kick off vacation! We got there right as they were opening, so it wasn’t crowded. They were playing some weird Mexican music that was a little bit much. I don’t assume that’s the norm here! One of the bartenders must have just been feeling it that day.

They’re really well-known for their sour beers, and have a really impressive resume of good ones. Ben opted for a vertical of Figaro, and I was really intrigued by their “live from the barrel” beers, so I went with one of those. It’s essentially a cask beer that pours from a permanent tap in the wall.

They also have a small menu, and Ben and I both got a cup of beer cheese soup that was unique, but tasty. I like to start a beercation with a “slow and steady” small snacks philosophy. Rather than to inhale a big meal and be too full to continue the day/night drinking, I love ordering small snacks at several stops. (Really, it’s just an excuse to eat all the food from all the places.)

My favorite beer here was Vlad the Imp Aler, an American Wild Ale. Absolutely delicious! This beer hasn’t seen production for years now. I had the 2013 on draft, and it exceeded my expectations. (4.75.)

I also spotted what looked like a big Crock Pot sitting near the taps and asked about it. The slow cooker was modified to incorporate stainless steel coils, and they actually use it to hold and serve a beer they do a mulled cider treatment on, heating the beer and adding mulling spices to it. I was so intrigued by this and would have ordered one next, but Ben was quickly feeling worse and worse. So I took him to the hotel and set off on my own Uber-chauffeured adventure. 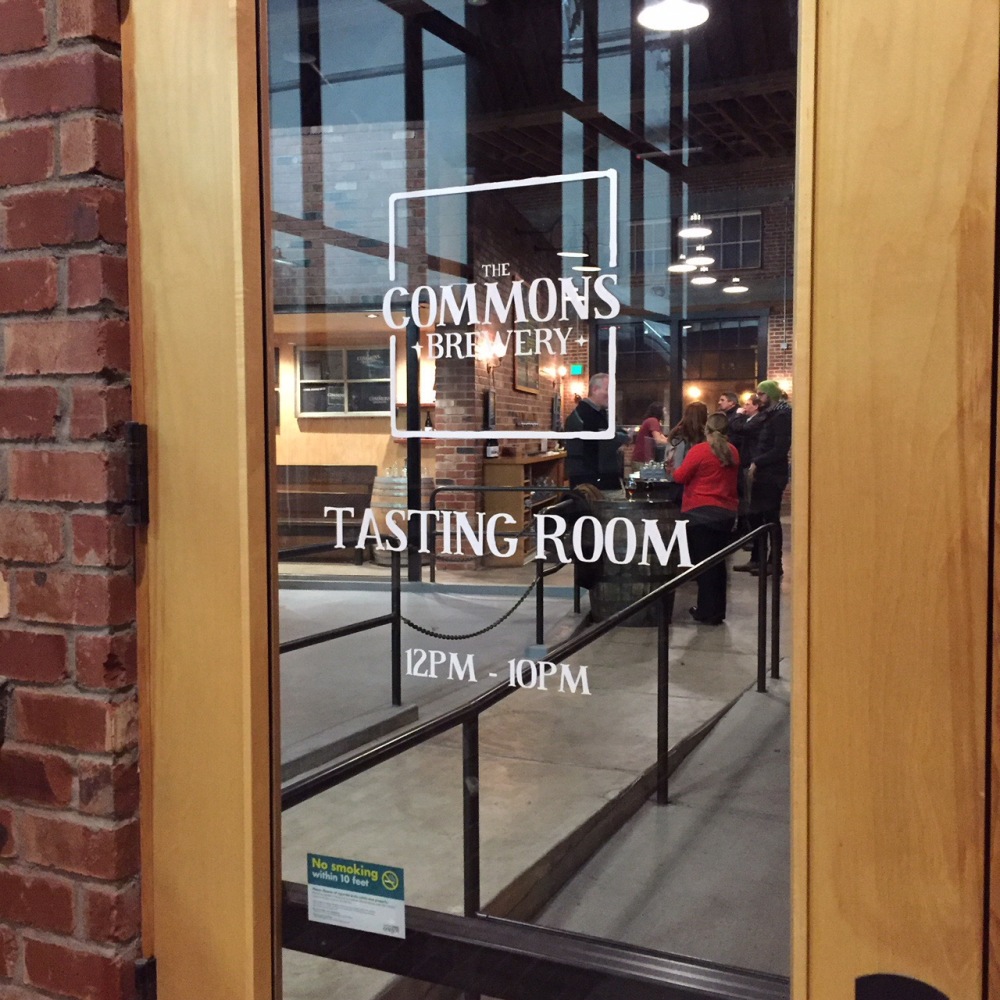 This is just a block away from Cascade. They brew some nice farmhouse beers, and they house a separate business that provides food, the Cheese Annex! Not much is better than a big ol’ board of stinky cheese paired with a “barnyardy” farmhouse ale. So obviously, that’s what I got.

The Commons seemed like the local spot for people to grab post-work beers. I wish I had tried more beers here, but I wanted to save time for other spots. I finished my Urban Farmhouse Ale, their flagship beer, polished off some cheese, and headed on foot for the next spot, wanting to visit as many places as possible.

About a 10 minute walk from The Commons, Basecamp Brewing sits on a dimly lit street. I appreciated the outdoor/adventure decor, including a canoe hanging from the ceiling. But I could have skipped this one and had time for something else. We’ll leave it at that! I was bound to find at least one of these spots on my vacation. I’m glad it was only one. I’d be curious to visit again. Just because the first time wasn’t what I wanted it to be doesn’t mean that the next visit will be the same!

Hair of The Dog 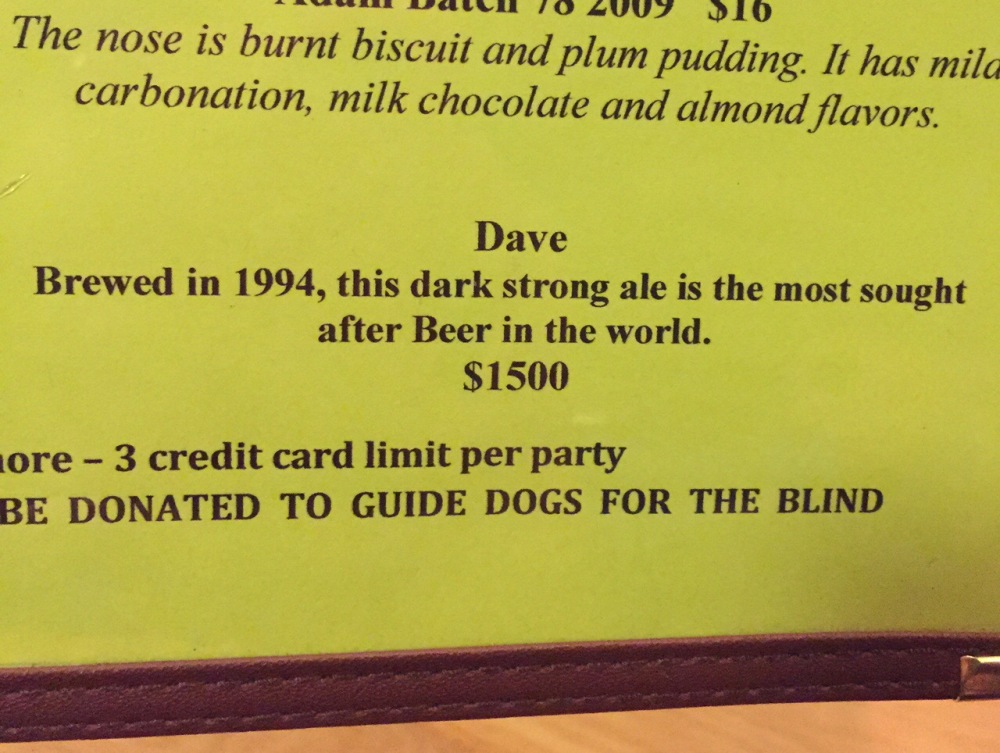 Redemption! THIS is what I needed. Especially after that 20 minute walk through the world’s longest rape alley while travelling from Basecamp. Uber-ing it the rest of the way for sure!
Hair of The Dog is known for their original, creative, and unusual beers. This is the beer geek hangout, for sure. (I sat beside someone from Draft Magazine, not discovering that until I saw their Instagram post shortly after mine.) It was pretty crowded, but it’s a moderately big space.

They actually sell the most expensive beer in the world, Dave, a 29% 1994 barleywine available at the brewery for on-site consumption only, at $1,500 a bottle. It’s apparently still drinking very well! But I can buy a LOT of amazing beer with that kind of money. So no Dave for me!

They also do some crazy things like fermenting some beers in a concrete egg! These are the “from the stone” beers. I’m curious to try more of these. They had an unfiltered double IPA named Blue Dot From the Stone that I tried. I wish I had tried their regular Blue Dot (fermented in stainless steel) beside it to pull out the flavor impact the concrete egg had on the beer.

I also tried Bart, a fruit beer with pears, and Doggie Claws, a fresh American Barleywine, and both were great. The mac and cheese I had alongside those didn’t disappoint either! The woman sitting beside me had an enormous piece of cheesecake that I NEED to order next time I’m there. I seriously regret not getting that as well!

Deciding to have an Uber drop me off at my first stop 20 minutes from where my hotel was and trying to walk and Uber to all of the places wasn’t the best idea with the limited time I had and lack of daylight. If I had taken our rental vehicle, I easily could have kept going, trying less beer along the way, of course. But I could have visited more breweries. I didn’t feel like Ubering 20 minutes back to the hotel to get in my vehicle to drive 20 minutes back to where I wanted to be. And I had already walked to the places I could reasonably walk to. So I opted to visit one last spot.

I almost skipped stopping here to go eat at Toro Bravo, a Spanish Restaurant that my friend who visits Portland annually called “next level shit”. But that mac and cheese at Hair of The Dog beckoned. (Next time, Toro Bravo!)

So doughnuts OBVIOUSLY made sense as my last stop. And I don’t even like doughnuts! I could get super fresh free doughnuts any time at my old job, but I don’t think I ever grabbed one!

Doughnuts just aren’t a food I crave. But I figured it wouldn’t hurt to check out what they hype was all about. And I assumed Ben may not be up for breakfast the next morning, so a doughnut could work for a quick vaycay breakfast for me!

THIS is some next level shit! Voodoo made a doughnut lover out of me!
First of all, the neon voodoo doll shaped doughnut sign (complete with giant pretzel stick through the heart) at the corner of the building is a damn work of art that begs you to enter. The Uber driver who dropped me off here told me there’s usually a line running outside the building (at 9:00 at night!), and said I was lucky there wasn’t tonight. There was still a line inside. But that gave me time to eye fuck the shit out of those glorious doughnuts revolving around on different tiers, each at different speeds, in a cylindrical glass case of glory by the cash register. There’s also a pretty tasty looking giant doughnut hanging on the ceiling alongside chandeliers, and lots of other fun things to check out 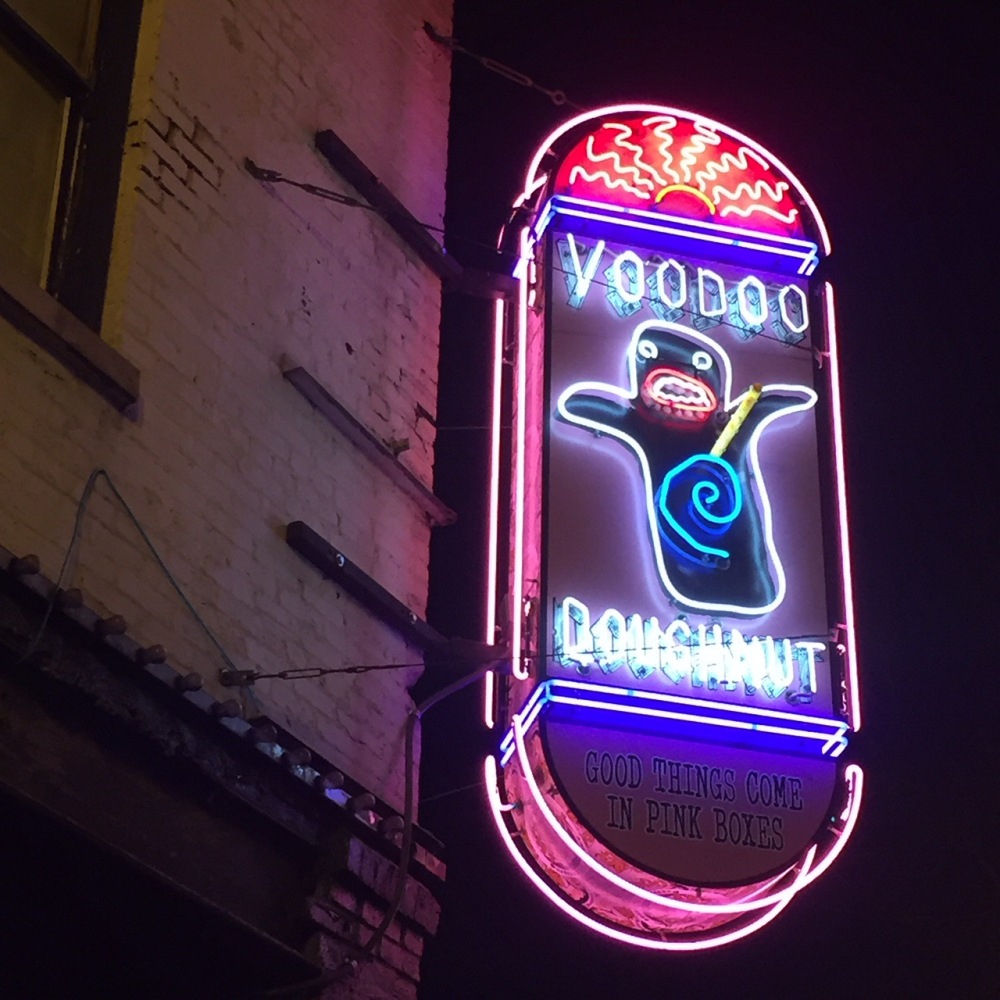 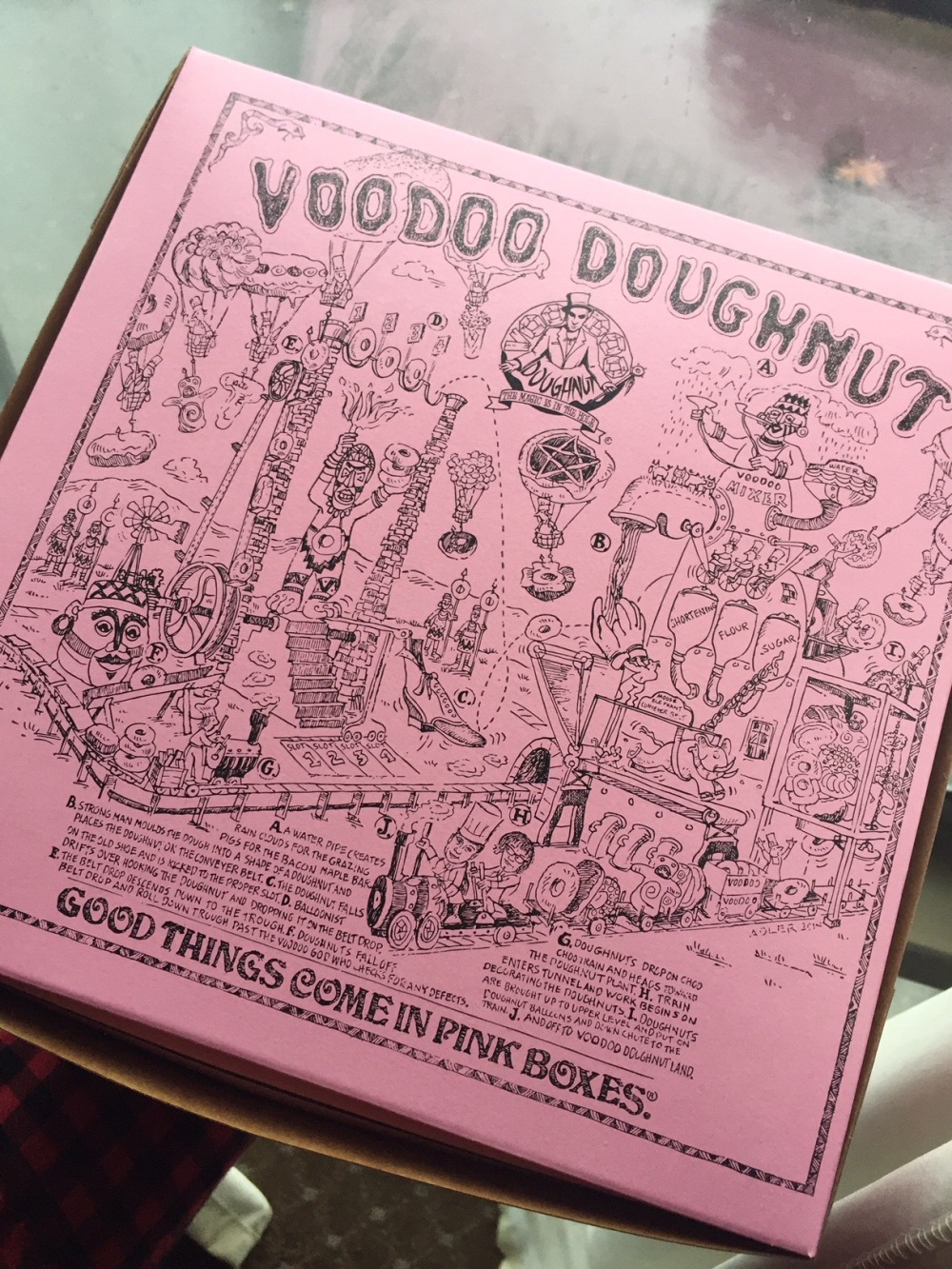 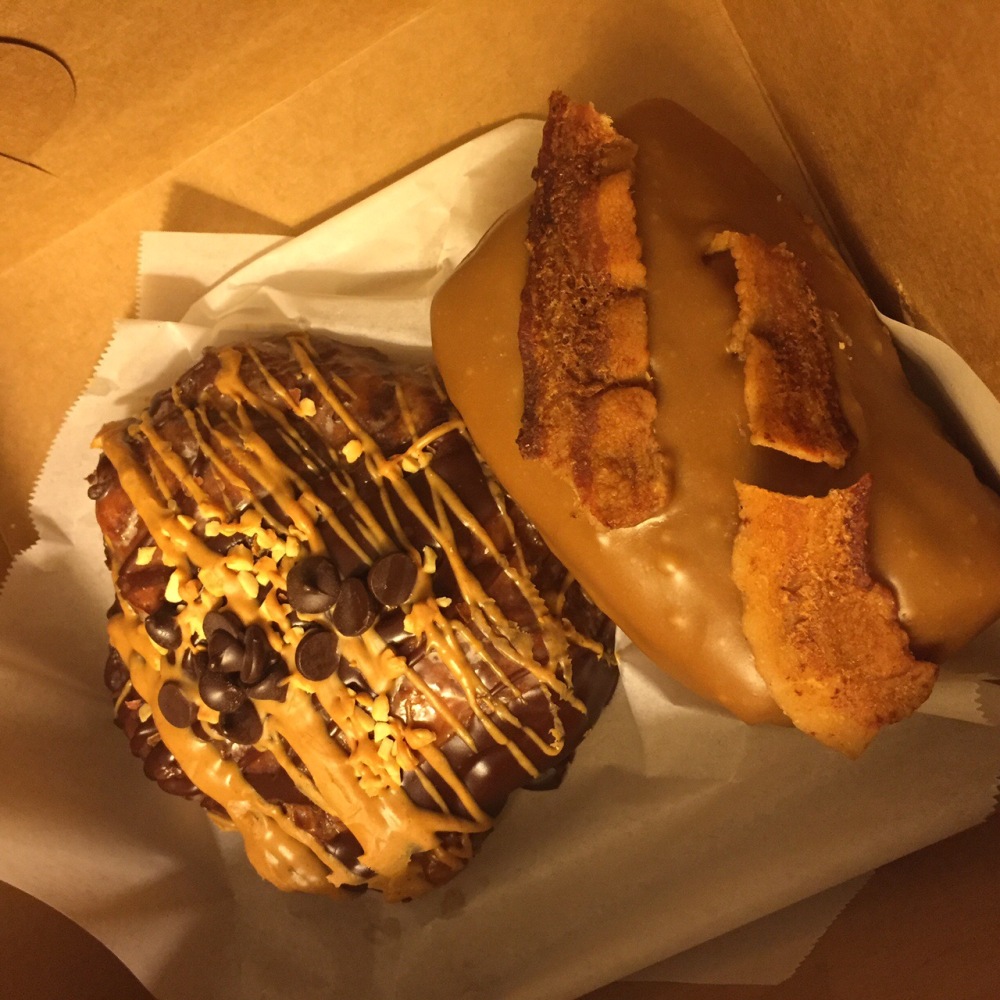 I grabbed 2 doughnuts. A bacon maple bar and a Memphis mafia doughnut, a banana fritter topped with peanut butter, chocolate, peanuts, and chocolate chips. TOTALLY would have paired AMAZINGLY with a banana fluffernutter smoothie from Sheetz! Just saying! 😉

They were enormous, and the best doughnuts of my entire life! These weren’t your cheap doughnuts. That maple was quality stuff. And the fritter was to die for. I’m not even a huge banana fan! I’ll definitely visit Voodoo again.

I didn’t bite into them until the next day. So I scheduled another Uber to pick me and my doughnut box up. From there, I had a directionally and GPS challenged Uber driver drop me off at a drugstore so I could get supplies for my poor sick husband. Tons of Pedialyte, some huge bottles of water, some cough syrup for myself, and doughnuts in hand, I set up my last Uber ride for the night, armed and ready for what tomorrow had to throw at us!

Stay tuned for the rest of my beercation blog posts!